See me at the New York Times

I have taken up blogging at the New York Times and so am updating this blog infrequently.  Please follow my Times posts here.

It's a new year. Time for a dubious causal claim!

A new study shows that richer neighborhoods in New York City are closer to public transportation and economic activity. It then makes a big leap, asserting that the causal arrow runs from transportation to income. This is a plausible hypothesis, but the study provides no empirical support for this interpretation.
The study definitely does not support the sensationalist assertion that a college education is less important for financial well-being than access to public transportation:
“In New York, mass transit is the path to economic mobility, not education,” said Mitchell Moss, the center’s director. “It’s far more important to have a MetroCard than a college degree.”
The quote is from the Wall Street Journal
http://www.wsj.com/articles/report-connects-jobs-transportation-web-1420246652
Google "Report Connects Jobs, Transportation Web" if the WSJ link hits a paywall.
The full study is here:
http://wagner.nyu.edu/rudincenter/wp-content/uploads/2014/12/NYURudinJobAccessReport.pdf
Posted by Unknown at 6:24 PM 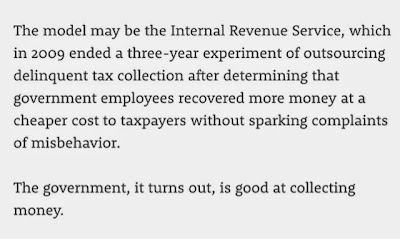 On The Perils of Being a Policy-Engaged Academic

Jon Gruber is getting a ton of heat for his comments on Obamacare, which were recorded in seminars. Jon was the intellectual architect of Obamacare, which has fundamentally changed how health care is funded in this country. Millions who did not have health insurance are now covered. Few academics have had the policy impact that Gruber has.

When you have influence, out come the knives. Opponents of Obamacare have scoured the internet for "gotcha" Gruber moments.  And because Jon is a forthright academic, there are lots of examples of him saying what's true rather than what is politically expedient.  There are probably also cases of him being wrong, which happens even to MIT economists. A video of me being impolitic and/or wrong would be a breeze to compile.

I am proud to say that Gruber was my doctoral adviser at MIT. He taught me how to be a rigorous and relevant researcher, and for that I am eternally grateful.

I wrote in a recent column in the New York Times that tuition at public colleges has doubled over the past 25 years but that, paradoxically, per-student revenue has been flat. The explanation? State support for public colleges has plummeted, leaving colleges increasingly dependent on tuition to fill the revenue gap.

All of the figures discussed in the column were adjusted for inflation. The most common statistic used to adjust for inflation is the Consumer Price Index (CPI), calculated by the Bureau of Labor Statistics. As noted by a commenter at the Upshot, the report I cited for trends in college revenues did not use the CPI but rather an index developed by the State Higher Education Executive Officers (SHEEO), an association of public colleges. Is this price index a biased measure that inaccurately portrays revenue trends for public colleges?

To cut to the chase: the trends are unchanged if we use CPI to adjust for changing prices between 1988 and 2013. Revenues at public colleges have risen little, their net tuition revenue has more than doubled, and state support has sunk.

Colleges are more labor intensive than other industries, so the HECA puts a heavier weight on employment costs than the CPI, with three-quarters of the HECA index going to the Employment Cost Index and a quarter to the Gross Domestic Product Implicit Price Deflator. Both of these indices are calculated by federal agencies - the Bureau of Labor Statistics and Bureau of Economic Analysis, respectively. This was a good choice on SHEEO’s part – it’s better to have a third party calculating the index so as to avoid the temptation of manipulating the statistics for self-serving purposes.

When wages go up faster than inflation, the HECA goes up faster than the CPI, since it weighs labor costs more heavily than the CPI. But since wages for most workers have been flat for decades, differences between the CPI and the HECA are small. The online CPI calculator tells us that a consumer in 2013 needs $1.97 to buy what she could have bought for a dollar in 1988. The HECA index says that a college in 2013 needs $2.12 to buy the inputs it could have bought for a dollar in 1988.

How do the different price indices affect our conclusions about stagnant college revenue and spiraling tuition prices? Not much. According to the HECA, public colleges are getting just about the same revenue per student in 2013 ($11,500) as in 1998 ($11,300). According to the CPI, colleges were only getting $10,500 in 1988, so it’s a bigger jump to $11,500. Put differently, the CPI says the revenue of public colleges has increased by 8% over the last quarter century, while the HECA says it’s 2%. And the two indices agree that state support for public colleges has plummeted, while tuition revenue has doubled.  The index might differ, but the story remains the same.
Posted by Unknown at 3:06 PM

Kids' Education and Parents' Longevity - Authors' Reply and Mine

I posted a piece to the New York Times Upshot this week discussing  a paper by Esther Friedman of RAND and Rob Mare of UCLA.  The authors' reply is now posted at the end of my Upshot article. Go read it and then come back for my take, below.
Back? Great.
The heart of my post was that the paper did not convincingly demonstrate a causal relationship. If the paper did not claim causality, this would be a hollow criticism. In their reply the authors say "Nowhere in our article do we assert that the relationship we find is causal." I went back and reread the paper. It uses causal language.  It is especially prevalent in the abstract and discussion, where editors and readers expect the punchline. Many a reader will read only these sections.
This may seem nitpicky. But language matters. While academics might read between the lines to discern that a paper isn't really claiming causality, the lay person and policymaker almost certainly won't.
Language in the paper that describes a causal relationship, with emphases added, is below. Note you don't have to use the word "cause" to imply causality. "Guns kill" is a causal statement.  So is "Guns have independent effects on mortality."
Abstract:
"We show that adult offspring’s educational attainments have independent effects on their parents’ mortality, even after controlling for parents’ own socioeconomic resources."
"These findings suggest that one way to influence the health of the elderly is through their offspring."
Introduction:
"This article investigates whether the educational attainments of individuals should be viewed as a family resource, benefiting not only the individuals themselves but also their parents."
Discussion:
"This research isolates a mechanism through which differences in health and mortality come about, to wit: the differential educational attainments of offspring."
"Our results suggest that in the United States, parents benefit from having more-educated offspring — a benefit that extends beyond the effects of parents’ own SES."
"Although health policy research typically emphasizes individual interventions with immediate outcomes, this work shows that another way to influence the health of the elderly is through their offspring."
"Policies targeting one generation of the family may set in motion a series of reactions that lead to improved health for others in previous generations, subsequent generations, and the broader family unit."
"This article shows that generations of families are interdependent, and the well-being of one generation does not necessarily come at the expense of the well-being of other generations. Improving offspring’s lives may benefit not only the offspring themselves over their lifetimes but their parents as well."
Posted by Unknown at 10:45 AM

Dosage Matters. If It Doesn't, Your Study is LIkely Wrong

A warning sign of a biased estimate of a treatment effect: no relationship between dosage and the outcome.
In this study highlighted in the New York Times, the authors conclude that five minutes of regular running has the same effect on health as 150 minutes.
This statistical red flag signals that runners, as a group, are different from non-runners in ways that have their own effect on health. In stats parlance: omitted variables bias.

H/T to Professor Ariel Kalil.
Posted by Unknown at 9:54 AM